A HISTORY OF BERAKAH AND ITS ACHIEVEMENTS

The whole world is on a pause, and possibly a re-set.

Things are no different here with Berakah Arts. We’ve reached a natural hiatus and we don’t know when we will be able to do again what we do best – bringing together people from all races, religions, ages and backgrounds to make uplifting music.

In the meantime we thought this might be a good time to reflect on and celebrate our work taking a look at our history, milestones and some of the positive influence we’ve had on our communities.

But when exactly did it all begin?

Mohammed Nazam (that’s me) , guitarist, composer, tutor and writer, has a crazy idea.

The team is assembled

A Few Minutes Later – he rings close friends and musical colleagues Mark Hinton Stewart, Chantelle Duncan and Rex Horan to explain his crazy idea – a band made up of musicians from a variety of faith heritage and cultures who will make high quality music of an unusual mix of Jazz, Classical and world influences which will spread a message of hope, unity and peace. A Few More Minutes – Later – No one has slammed the phone down.  In fact, they all agree to be involved.

The Final Piece is Found

Backstage at a concert Nazam is discussing the violin predicament with a fellow band member and the band member says “I know just the right person for you!”   A phone number is given, a call is made and a violinist comes round to Nazam HQ to jam, and chat n’ play. Coming from a purely classical background she has done little improvisation but she can play the violin brilliantly, she loves the ethos of the band. She is willing to take the plunge. Nazam welcomes Serena Leader to complete the The Berakah Project line up !   Nazam sets about writing new music for the new band.

The Puzzle is Nearly Complete

Two parts of the line-up for the band are still missing – world percussion and violin. Mohammed is insistent that the vision in his head is of a female violinist of Jewish background. He knows no such person. He does, however,  know a master percussionist from Algeria, Abdul Kader Saddoun, who also agrees to become the fifth member. The sixth and final member is still missing, and Nazam (me again) has no idea how to find her.

The Berakah Project plays the first concert on the main stage at the Brent Respect Festival, performing a mix of original compositions and their own take on some classics. The first concert is met with cheers and cries of ‘more’ by the sun-drenched crowd.

The band’s first indoor concert is at The Harrow and Wembley Progressive Synagogue. Invited by Rabbi Frank Dabba Smith, the concert is a complete success and not just musically; as it’s Ramadan, Rabbi Smith opens his office to several Muslim women in attendance so they can hold evening prayers. The Berakah Project shows that it’s events are about more than just the music.

Work starts on a number of projects – writing and recording the first album, organising a committee, a bank account and a treasurer. The Berakah Project is now a formal community organisation!

Berakah begins to work with schools. Three schools in NW London – a secondary comprehensive, a primary and one Muslim madrassa – are selected for music workshops held over the course of a few weeks and then all bought together for a showpiece Gala Night. The children who take part are all thrilled by their experiences as musicians and performers, especially the success of their Gala Night performances, and the template for future Berakah education work is set.

Supported by The Arts Council Of England,  The first Berakah Project tour of England.  The Berakah Players perform free concerts in London, Bolton, Bradford, Derby, Luton, Liverpool  and Oldham over a period of several  months. In each location we work closely with community groups so that all the events draw a diverse and mixed audience, bringing the communities together to celebrate and share their connection. We filmed a very short and cuddly video for Youtube and here it is. Bear in mind that, in the early days of YouTube, film quality was a bit variable.

Also in 2007 the band plays two very special concertS at prestigious British institutions. Firstly at The British Library for the debut of the Libraries Sacred exhibition, a collection of texts from various world faiths. WE are then invited to perform at The British Museum as part of their Middle Eastern Faiths Day during  the Museum’s summer exhibition season.

The Berakah Players embark on another National Tour. We play all over the country – Leeds, Wiltshire, Winchester, London, Liverpool and engage with schools in each location, strengthening the focus on education and development.. Other notable concerts include St. Ethelburga’s Centre for Peace.

Music for the Heart is Released

The release of the first album, “Music for the Heart”, coincides with a sell-out launch concert at the incredible St. Paul’s Church, better known as The Actors Church, in the heart of Covent Garden. The  audience hears speeches from survivors of the Kings Cross bomb attack and film-makers working in the Middle East conflict zone.   The Berakah Players receive a standing ovation.

The Berakah Players perform a sell out concert at The Purcell Room in the heart of the famous South Bank Centre. It is a fantastic night of new music and an introduction from one of the world’s leading commentators on religious affairs, Karen Armstrong. Due to work or family commitments there are some line up changes – the bass chair is occupied by Richard Turner and then Eustace Williams, and while Serena is ‘with child’, Tanya Sweiry takes up the violin duties.

Work starts on the second album – songs are composed, lyrics written and the  process of recording begins at Mark’s home studio. Early starts and very ,very late finishes. Both “Music For The Heart” and “One Ray of Light” are available from iTunes and Spotify!

One Ray of Light Launched

The second album, “One Ray of Light”, is launched with two nights at ‘The Actors Church’ in Covent Garden. The album is a marked departure musically featuring new music especially composed for the album and incorporating more overt Jazz and Classical influences.

Nazam (that’s still me) starts to look into the process of starting a charitable organisation and selecting a board of Trustees. By the end of the year The Berakah Project is a registered charity and a Limited Company, a new phase of our existence. 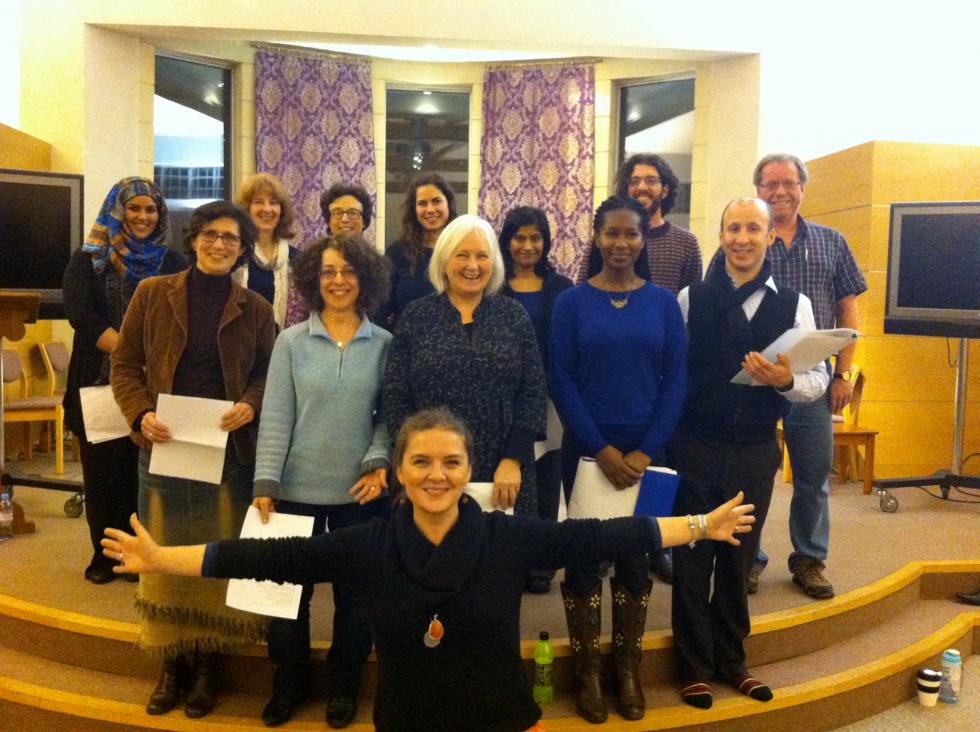 The Berakah Project has a name change to Berakah Arts in order to broaden the range of arts activities that might unite people.

To celebrate ten years of musical loveliness Berakah Arts embarked on another National Tour , again supported by The Arts Council of England. New music is written especially for the tour and two new members join – Shirley Smart on cello and Helen Sanders-Hewitt on viola. The music is taken in a more acoustic direction with songs having a more ‘small chamber ensemble’ feel. Again working closely with established community groups in each city, the concerts are kicked off by a special gala at St. James’ Church in Piccadilly, London. The choir takes part and performs a set of songs and London is chosen as the place to launch the first Berakah Arts Youth Band facilitated by me (it’s Mo Nazam again) . The youth band plays a spellbinding set and the whole night is brought to a close with rapturous applause for the new music performed by the Berakah Players.   The tour takes us to perform concerts and workshops in Brighton (Brighton and Hove Methodist Church),  Luton (Library Theatre) , Leeds (Cross Flatts Park), Rotherham (Old Market Theatre) and Oxford (St. Hilda’s College) which are all ‘hotspots’ of social tensions brought about by potential divisions in the communities. The concert in Leeds was held in the spirit of peace and reconciliation on the commemoration day of the 2007 London terror attacks, as two of the people involved in the bombing came from that community in Leeds. In Rotherham the concerts draws an audience including Muslim women and young…

Nazam goes about recruiting members for the youth project, now called ‘Increase The Peace’. With a home base at St. Mary’s Church in Acton, the rolling collective of young musicians meets once a week to rehearse. In the next few months they also play a number of concerts locally such as open days at Acton Library, the Ealing Jazz Festival and a concert at the Bollo Lane Youth Centre on what was one of West London’s ‘toughest’ estates!

The Berakah Players perform a beautiful, if subdued, concert at the historic West London Synagogue in Central London the day after the London Bridge terror attacks in London. The concert is preceded by a candle lighting ceremony in memory of those killed and injured. The heightened emotions of the concert are experienced by a very diverse audience who come together for peace. 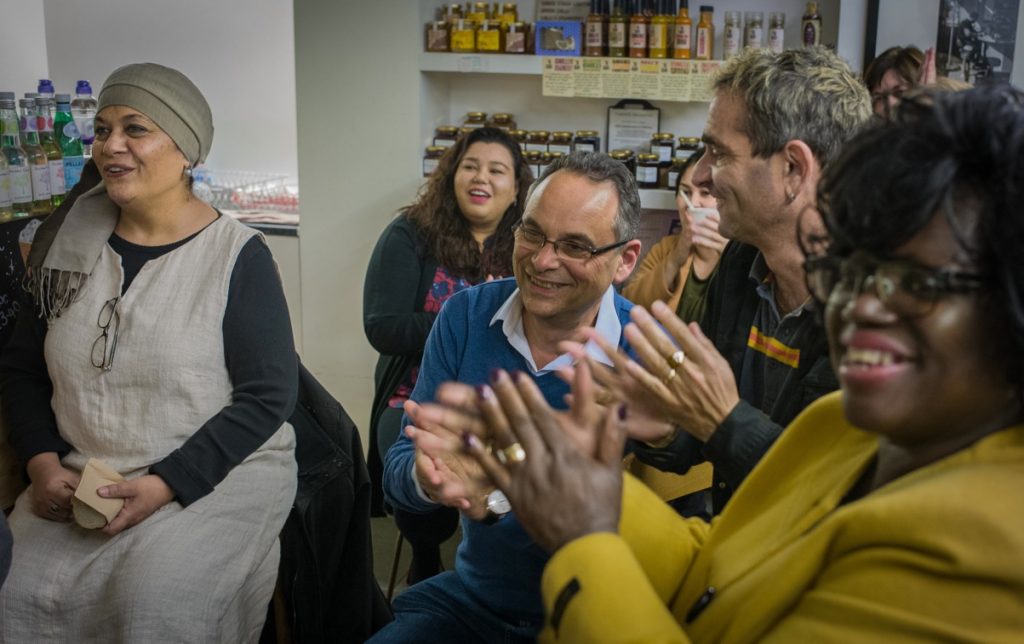 Berakah Arts is invited to be the closing event of  the week long Waterloo Festival at St John’s Church, Waterloo, London.  The concert is held in the memory of Ruth Richman,  a Jewish refugee from Germany during the Nazi persecution and supported by her husband Michael Richman. The night features songs from the Berakah Sing For Peace Choir, the Increase The Peace youth band and The Berakah Players. It is a wonderful night of music and positivity.

The Sing for Peace Choir and the Increase The Peace youth band perform at The Houses of Parliament at the request of MP for Ealing Central and Acton Dr. Rupa Huq. . Both bands put on a spirited performance to the specially invited audience of dignitaries and members of the Ealing/Acton community. It’s a fantastic way to bring the year’s summer events to a close.

Berakah organises three schools’ projects based in West London schools. The focus is on Pupil Premium students so that disadvantaged kids get to take part in live music performance. Over the course of three days we worked with over 75 children, engaging them in rehearsing and performing with singers and a band!

After seven glorious years, just minutes before the pandemic lock down, The Sing for Peace spring term is cut short as the pandemic takes hold; the Choir has to close. Over the  seven years, hundreds of people have taken part in the weekly sessions, performed two inspiring concerts a year, learning and singing a wonderful selection of uplifting and powerful songs such as Something Inside So Strong, Here Comes the Sun, You’ve Got a Friend and You’re The Voice and making friends and bonds, united our shared passion for performing live music.

So, there we have it. Our history up till now. As a special thank you we’d like to PREMIER some footage from our 2015 London concert at St.James Piccadilly. This is one of the pieces written for the tour and is a 20 minute suite in four parts. With the choir joining in at the end. Yes, stick on your headphones, sit back, relax and enjoy this song of Hope – I See Feathers Everywhere.

We don’t know what the future holds. The current hiatus may be the natural culmination of our work or it may just signal a re-set. We’ll see.

What we do know is that the last fifteen years have seen some incredible work.

I thank you all from the bottom of my heart.