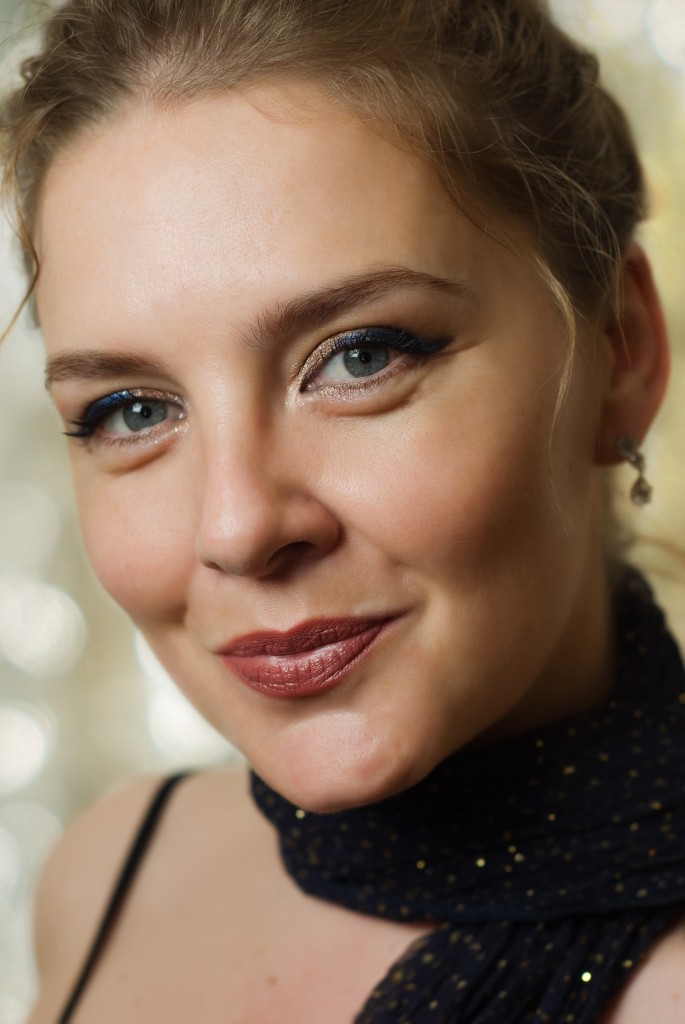 Originally from a small fishing village Pittenweem in Scotland, Chantelle performs in a wide variety of musical genres. After studying jazz & popular music in Newcastle, where she won the Blackfriar’s Young Jazz Soloist of the year, she went on to sing in Japan, the Middle East and then in New York City. Her credits include radio and television work as well as writing and recording both for herself and other artists. She is the lead singer in original band Berakah and has backed various artists which includes duetting with Maceo Parker at The Roundhouse for Save The Children’s “Night of Blues”. Other artists Chantelle has sung for are Ronnie Wood, KT Tunstall, Melanie C, Dr John, Camilla Kerslake, Nile Rodgers, Nerina Pallot, Bonnie Tyler, Gilbert O’Sullivan, Sharon Corr, Brian May, ABC, Alexander O’Neil and Marc Almond. 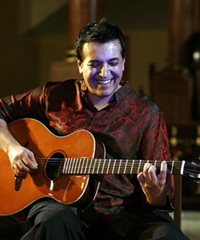 A professional musician and composer for twenty years, Mohammed Nazam is also a respected music educator. In February of 2005 Mo was invited to participate in two events for HRH The Prince Of Wales. One was a project that saw the Prince attending a recording session led by renowned music producer Trevor Horn (who has produced worldwide hit records for Frankie Goes to Hollywood, Seal, Yes and Buggles).In March 2005 Mo was invited to a special Celebration of British Music at Buckingham Palace, hosted by HRH The Queen and Prince Phillip, which was attended by over 500 guests, including some of the most influential and popular musicians, composers, artists and producers from the British Music Industry.

Born in Pakistan, Mo grew up in the UK where he was exposed to music and art from all over the world, ranging from the Indian film scores of his childhood to the rock, soul and jazz that are the foundations of the contemporary music styles found in one of the worlds most vibrant cities. Mo took up the guitar at age 15 and started playing in local bands right away. Since then he has gone on to play with some of the most prestigious musicians and bands in the UK.

In early 1997 Mo was commissioned by the Soho Jazz Festival to write a new composition to be debuted at the ’97 Festival, held in late September. Established for 12 years the Soho Jazz Festival is an internationally renowned event and this was the first time that a new piece of music has been especially written for the festival. The piece highlights the variety of cultural and musical styles that Mo has been involved with as a musician, composer and avid fan.

In 1999 Mo, together with computer wizard Phil Thompson, was commissioned by Serious Productions (one of Europe’s leading music promoters) for a one off project. The X Foundation, featuring random musical ideas generated by computer fractals combined with a live band, was a psychedelic sci-fi extravaganza that (in true Rock ‘n’ Roll spirit) split immediately after it’s first performance, due to musical differences.

But of course, that’s not all.

Since 2001 Mo has worked with The Prince’s Trust on their residential SoundLive courses teaching socially disadvantaged young people (homeless, substance mis-users, ex-offenders) to play instruments and perform live. The week-long course features a strong focus on personal development, team working, communication and motivational skills. Each day the students learn music from around the world and work in bands, culminating in a grand gala concert at the end of the week. He also teaches guitar and leads Jazz workshops at Richmond Upon Thames College in Twickenham.

For much of the 90’s Mo wrote articles and reviews for numerous music magazines including Melody maker, The Guitar Magazine and Making Music. For the Guitar Magazine he interviewed such legendary artists as John McLaughlin, Allan Holdsworth, Mike Stern, John Scofield, Steve Lukather, Al DiMeola and Robben Ford. Recently he started writing for the Guitarist, one of Europe’s leading music magazines, and has so far written pieces on George Benson, Pat Metheny, Todd Rundgren and a cover story on John 5.

Currently he’s trying to get some sleep. 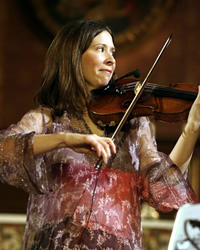 Serena Leader has been a regular recitalist at London venues including The Wigmore Hall, together with the eminent pianist Gordon Back. Serena was a celebrated child violinist in Holland where she grew up. By the age of 14 she had performed as soloist with orchestra in the Amsterdam Concertgebouw including television and radio broadcasts. Serena has made guest appearances with the well-known Hungarian violinist, Roby Lakatos at London’s Ronnie Scott’s Club.

Serena also has a degree in Medicine. Over the years she has given many concerts in aid of Medical Charities, including the Royal Free Hospital Breast Cancer Appeal, Crohn’s Disease in Children, Cancer Research Campaign, Breast Cancer Campaign, Starlight Children’s Foundation, Teenage Cancer Centre of The Royal Marsden Hospital, Diabetes UK and UNICEF. 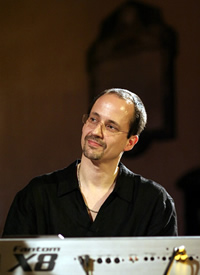 Mark Hinton Stewart is a cutting edge, contemporary British film composer in enormous demand. He moves seamlessly from a refined classical knowledge to a complete understanding of the most modern sounds around – Mark assisted on the Music Supervision of both Lock, Stock and Two Smoking Barrels and The Real Howard Spitz. Originally a classically trained pianist and organist, he has worked with some of the biggest names in the film/pop scene, from Sir George Martin to Jools Holland and Adam F. Mark has scored five films including Tube Tales (the Sky Pictures movie with Ewan McGregor, Denise van Outen, Rachel Weisz, Jason Flemyng and Bob Hoskins), The Truth Game for Screen Production Associates, the feature Dog Eat Dog for Film Four/Tiger Aspect Pictures and Baby Juice Express for The Spice Factory starring Nick Moran. Recently Mark has scored the incredibly successful series Cutting It. 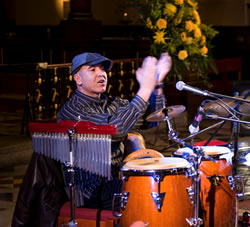 Abdelkader comes from Khemis Miliana in Algeria, a few miles away from Wahran, the birth-place of Rai. He started to play Rai music in his home country, accompanied by an accordion, guitar, kit drum, bass and percussion. An accomplished singer and musician, he led a band, which performed at many venues and festivals.

Rai originates from traditional Algerian music (Chaabi, Kabil, and Chawia, pop…) and also encompasses Jazz, Funk, Rock, Reggae, Fusion, and Blues. Based on strong rhythms, it is a very dynamic and danceable music. It has become the most popular music in North Africa and the Arab world; the music of today’s generation. Its popularity has quickly spread to neighbouring countries: Tunisia, Morocco, and Egypt and is now very popular in the Gulf States. Since France has a large Magrebian population, RAI music is now part of the French culture.

In 1988 Saadoun moved to the UK and in 1994 he formed a second Rai band in London. Saadoun’s current outfit is made up of nine musicians from different backgrounds using traditional instruments such as Mandole, Hadjoudj & North African percussion combined with European instruments including Brass, Keyboard, Piano and Bass guitar, Viola, Cello, Drums and Electric Guitars. He is a charismatic performer, able to enliven any audience with his infectious rhythms and dynamic stage personality.

Australian bassist, Rex, has been living and working in London since 1997. Recent performing and recording credits have included: A Girl Called Eddy (Epitaph) and White Buffalo (Stamina Wax Records). He has played, recorded and toured with Richard Bailey (Jeff Beck, Incognito) “Fast” Eddy Clarke (Motorhead), Winston Delandro (Bob Marley, Sly And The Family Stone), Scotty Gorham (Thin Lizzy) and Mungo Jerry. He played on Verena Poetzl’s single Addiction in 2004 (Universal), which reached number one and went gold in Austria. His work in London’s R’ai bands Yusef and the Halal Joint and Cheb Nacim has seen Rex tour the European festival circuit.He is a founding member of the Experiments in Spontaneous Performance (ESP) experimental cross-disciplinary improvisation company. His forays into the world of avant-garde and improvised musics included the staging of the West Australian premiere of John Zorn’s Cobra in 1996. He plays with and conducts the London Improviser’s Orchestra.His expertise as a music educator has seen him working regularly for The Prince’s Trust Soundlive and The Irene Taylor Trust Music in Prisons. He has lectured in music and improvisation at The University of Western Australia, The University of Coventry, Warwick University, The University of Wolverhampton and the Richmond Upon Thames College.Writing about Rex and his various projects and bands can be found in The Who’s Who of Australian Rock Music (Fourth Edition onwards), Liverpool Of The Southern Seas (Fremantle Arts Centre Press, 2003), and a forthcoming book on improvisation by Chris Johnston (Nick Hern Books)He was twice named Bassist of the Year in the Western Australian Music Industry Awards (1996, 1997). 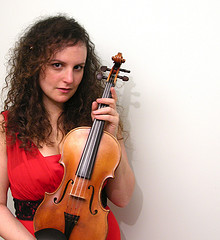 American-British violinist ,Tanya, was awarded a full scholarship in 2005 to study at the Royal Academy of Music, London where she studied with world renowned violinists Hu Kun and Remus Azoitei. Over the years she has taken part in masterclasses with distinguished violinists including Igor Ozim, Thomas Brandis, Emanuel Hurwitz and Aleksandar Pavlovic. Tanya has won awards from the Claudio Abbado European Young Musicians Trust and the Emanuel Hurwitz Chamber Music Charitable Trust. In 2009 she graduated with a First Class Honours, also being awarded the John Baker Development Award by Friends of the Royal Academy of Music and in 2010 won the North London Music Festival’s Premier Challenge Cup prize. Tanya has performed at many festivals and recital series including the Little Venice Music Festival, Winchester Cathedral Lunchtime Recital Series, Queen’s College Oxford Recital Series and Krakow Autumn Festival, Poland. Her flourishing solo career has most recently involved her concerto debut, performing the Tchaikovsky violin concerto with the North London Symphony Orchestra. Plans for 2011 include performing as a soloist with the Southbank Sinfonia and pursuing a Masters degree at the Royal Academy of Music. 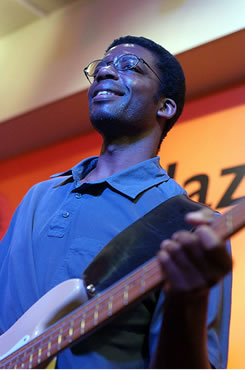 Eustace Williams is a founder member of the Macusi Players, led by the amazing flautist Keith Waithe. Eustace has acted as the informal Music Director for the band, and he’s also a regular on the London jazz, soul and Caribbean music circuit.